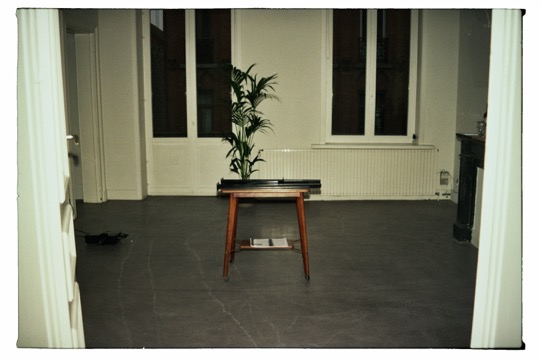 TAFEL was created as a website, a virtual world. During our residency in workspacebrussels (Feb 2017) we aimed to concretize the table conceptually and physically: these encounters are called SOUPER.
The menu we’re offering is based on three traditional and tasty dishes of the Belgian cuisine. With great care we prepared this meal and picked the finest ingredients, which means local, organic and fresh. Recipes!

SOUPER can be transformed, expanded or exchanged at any moment. It became a hybrid form, floating between an online platform and real life matter and encounters. This multifunctional table is the starting point to connect concepts and ideas. Its appearance and materiality will be explored and as time passes by, forms will follow functions.
SOUPER kindly invites everyone to gather around the table, stand, take a seat, eat, listen, taste, write, love, talk, laugh, touch, sweat, cry, yell, beat, hide, crawl, break, cough, snor, cut, shelter, dance, transform, or just do the dishes. 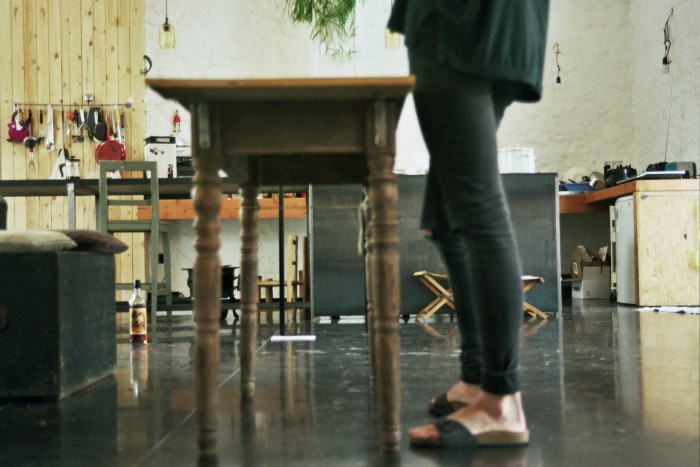 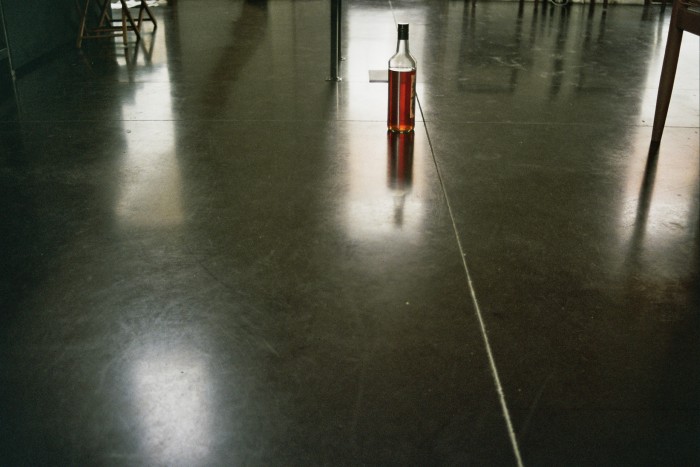 Before we get to the starter we wish to refer to Foucault and Les mots et les choses, or The order of things. The book is an archeology of the human sciences, in which he unfolds the origin of human knowledge, its development and existence. Foucault describes he first classifications of nature and life and the role of language in this. He unfolds the many structures of how we are taught to see the world, to name it and to use language to determine and compare. Language and words make things visible and by consequence knowledge can grow – the word is used as a 1 to 1 translation of the empirical.Following fragment as example

(Aphasia is the loss of the capacity to speak or to understand a spoken or written message. The patient doesn’t know any longer how to use words and language.)

It appears that certain aphasiacs, when shown various differently coloured skeins of wool on a table top, are consistently unable to arrange them into any coherent pattern; as though that simple rectangle were unable to serve in their case as a homogeneous and neutral space in which things could be placed so as to display at the same time the continuous order of their identities or differences as well as the semantic field of their denomination. Within this simple space in which things are normally arranged and given names, the aphasiac will create a multiplicity of tiny, fragmented regions in which nameless resemblances agglutinate things into unconnected islets; in one corner, they will place the lightest-coloured skeins, in another the red ones, somewhere else those that are softest in texture, in yet another place the longest, or those that have a tinge of purple or those that have been wound up into a ball. But no sooner have they been adumbrated than all these groupings dissolve again, for the field of identity that sustains them, however limited it may be, is still too wide not to be unstable; and so the sick mind continues to infinity, creating groups then ,dispersing them again, heaping up diverse similarities, destroying those that seem clearest, splitting up things that are identical, superimposing different criteria, frenziedly beginning all over again, becoming more and more disturbed, and teetering finally on the brink of anxiety. (Foucault)

Analogue to the table on which the aphasiac has lost structure, TAFEL aims to show how objects and subjects don’t need to be defined by a fixed nature or identity, but get meaning by their relation to all elements around and the way we chose to organize and combine them. Time for Deviled Eggs or Gevulde eitjes, the ordinary egg transformed in a delight for the eye, prepared as Foucault would have liked them.

Over to the main course.
We asked ourselves how we could transform the virtual TAFEL into real life. A new question arose about the connection between the conceptual and the representable, between the verbal language and the image. The relationship between the two has been interrogated and used by artists like Magritte, Apollinaire, Kosuth and others and created a new dimension in their interference. 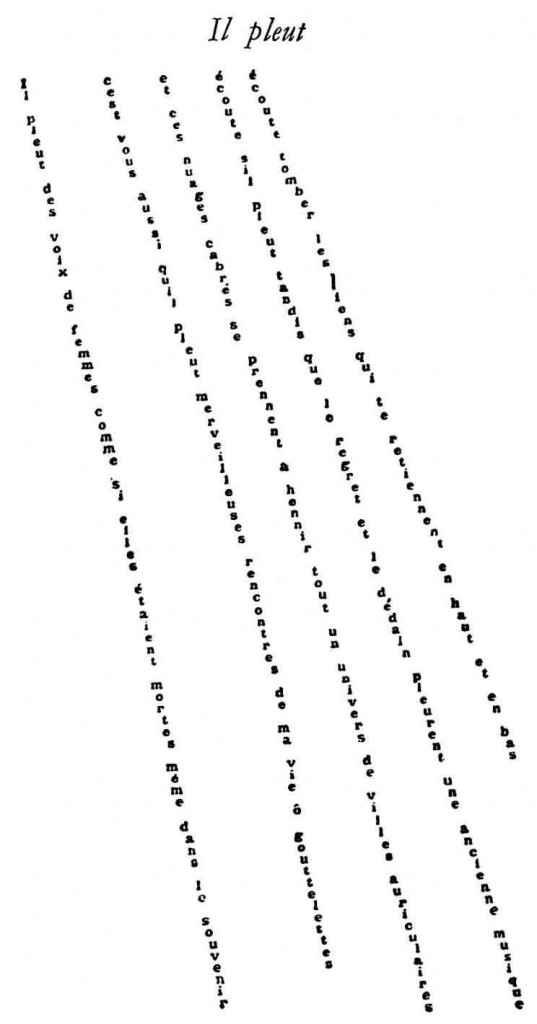 Magritte lets us think about how we see an image as the real object and defined this non-existing transformation in our heads with his famous pipe.  With his caligrammes, Appolinaire transformed words visually into images and images into words. Kosuth puts the real object next to the image next to the words. They work complementary in their difference and create an interspace in which their limitations are liberated. It is a deconstruction of the different fields that allows us to construct a new vision, that is more imaginative and that goes beyond conventions.

One and Three Chairs – Joseph Kosuth

TAFEL started as a concept and was firstly created in the virtual world. Our quest to the real life table made us wonder if we had to transform it into the object table, which would resemble the image of a table formed in our heads when we hear the word table. We didn’t think so. Brainstorm and discussion lead to this SOUPER, which has the starting object of  a table that reacts to different ideas, images, objects, opinions or actions. And so, it intersect the thought, the reality and the image. It can be expanded and re-thought over and over again and we wish it will keep on developing in this manner from now on. Let’s enjoy these hesperolletjes together now.

Let us introduce the dessert with another point of view on SOUPER. Inspired by the medieval tableaux vivants we tried to create a table vivant, in which our guests would become actors and the table the central requisite – one might see the link to the Last Supper.

Tableaux vivants were set up during public festivities as a way to communicate with their emperor and express their needs, performed by the population. These very particular creations, so to say hybrid forms between theatre and painting, are the result of collaboration of rhetoricians and painters and express a multilayered message. Mannequins, machinery, sounds, decorations and banderols were added to address to every layer of society – even people of the lowest class could distill a meaning from the play. The summary and certain conclusions of the tableaux were stressed by the use of frozen or silent personages and acts.

Tableaux vivants can therefore be linked to photography and the very own nature of the photograph, which always represent the death of the subject. Since the beginning of photography the medium’s supposed ability to document reality or on the other hand to fake the real has been examined. We show you the picture La Banquette of Bernard Faucon which couldn’t be more appropriate. Faucon’s works play with the thin line between fiction and reality. By putting mannequins and real models in one picture, the viewer gets confused, mislead and a feeling of uncanniness. The transition to a fantasy world creates a link between the world we are living in and the world we imagine, which gives us a feeling of resemblance, but also creates a distance. 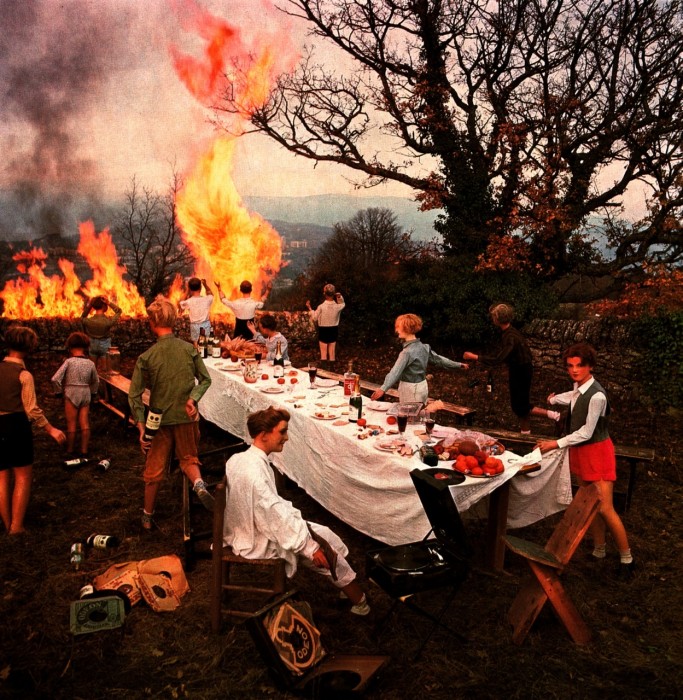 The constellation we created for Souper I will be a continuum for future Soupers. While constructing new menu’s, different people are very welcome to join our working table, to discuss and to give input, to become part of the next edition of SOUPER. 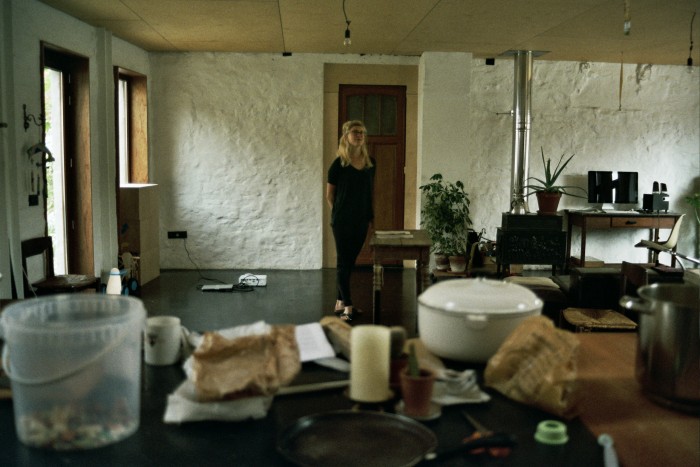